I write and formulate Many Opinions from Houston, Texas.

My dear friend Mike took one of my poems from a back issue of his magazine Mythic Delirium and threw it up for the wide world to see:

This Illusion of Flesh

This is one of those poems that if you asked me to tell you what it means, I would cock my head to the side and slit my eyes. It means what it says, right?

It arose from a pretty crabby place, but if you wish, you can picture me writing it dressed like Frank-n-Furter at the end of Rocky Horror, in torn fishnets and a glitter corset with eyeliner running down my face, singing “don’t dream it – be it.” 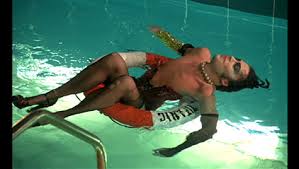 Although you know I would never put up with shoes so uncomfortable.

Where is my sleeping? I cannot find it. I am running on the barest minimum of dreams, and many of them are no good, like the one in which a fluffy red-and-black spider with about a 3-foot diameter was hanging upside down from the ceiling next to my bed.

“Don’t worry,” the friendly voice said in my dream. “It won’t hurt you. But it will climb down and cross the bed once you’re asleep.”

So in my sleep, I was … terrified to go to sleep.

I don’t even mind spiders. But come on.

Some things that make me squeaky:

1. Jim Jarmusch movies (do not ask me to choose whether I like Dead Man or Ghost Dog better, such a choice cannot be made amen)

Which is to say, I dearly hope Only Lovers Left Alive comes to Houston, or everyone will have to endure yet another in the endless rounds of This Is the Stupidest Town Ever To Be Stupid (Also Stupidly Hot) (and Ugly).

And I love this interview with Tilda Swinton who seems to be so strange in very entertaining ways and way more warm than anyone who looks like a pillar of magical moon alabaster should actually be.

“This, of course, is very close to what Eve in Only Lovers knows and values: the company of fellow travelers, the slow burn, the long view—and the perpetual guiding change of nature. Both are ­bigger than us; they support and carry us. We can fly at the back of the formation they form and take our place as a part of ­patterns they make … We set out to make something about ­companionship and wonder in the face of bitterness and ­disillusionment—and we set out to hope that companionship and wonder might win. And, in addition, Eve expresses something very accurate about me, which is not the artist in me but the cheerleader of artists, the bird at the end of the phone, the dance partner, the ­appreciative reader of proofs, the bearer of the bucket, and the sponge in the ­corner, sometimes the jester with the balloon on a stick. This is, beyond ­anything I think, the part of my work that I treasure the most, my job, above all, as artist’s moll.”

Because THIS. Because this, goddammit! Do you know I have hear people say they won’t even click “like” on someone’s publication announcement if they “can’t fully support the work”?

I want you to succeed. Your succeeding does not take anything from me. I want you to make the stuff you want to make, even if that’s just pie. I want you to pick up your failures and figure out how to make them better going forward. I want you to have those moments when you blow yourself away. I want your work to find the hearts it will comfort. And I will tell you this whenever you ask.

Through the Book Arts listserv, which I faithfully read despite having the bookbinding skills of a second grader, I found out about Ottawa artist Mary Kritz‘s project “365 days of handwriting.”

Handwriting! It is near and dear unto me. I sent in a poem. Here is a video about the project. You can see a glimpse of my contribution around 12:50.

(For pity’s sake, I split those. Eating all 3 would have split ME)

Edited to add Great Harvest: Black bean and rice soup, hummus and veg sandwich on spinach-cheese bread, a great desire to have room to eat all the bread ever

Sadly, all of this debauchery ended in The Barfs. Worth it.

Oh hey, guess where I have been?

I’m on a reading binge!

The Cellist of Sarajevo, Steven Galloway: Based on the true story of a cellist who, during the Siege of Sarajevo, played the same piece at a bomb site for 22 days straight to honor the 22 victims of the bombing. Told through the voices of 4 protagonists: the cellist, a young female sniper, a man with a young family going out to fetch water, and an elderly baker who stayed behind when his wife and son were able to escape. A very rich, very sad description of what it’s like to try to hold on to one’s humanity in the middle of war. I think this is a beautiful book.

Shades of Milk and Honey, Mary Robinette-Kowal: AKA Jane Austen with magic. Hints of both Pride and Prejudice and Sense and Sensibility. The use of magic (“glamour”) is really neat, described in terms of fabrics and thread. Cute love story. Very light and just the thing to read after the heaviness of the previous book. This is the first of a series, and I’ll definitely read the others.

Daughter of Smoke and Bone, Laini Taylor: Man, I wish I’d written this one. Starts off with a quote: “Once upon a time, and angel and a demon fell in love. It didn’t go well.” From there we’re in Prague with art school students, one of whom was raised by “monsters.” Really lively characters, lots of angst, lots of art. Head-smackingly good details. Also the first in a series, yippee!

The Signature of All Things, Elizabeth Gilbert: The most satisfying read I’ve had in a long time. I stayed up nights, I neglected chores, I seriously contemplated calling in sick to work. The whole lifetime of Alma Whittaker and some of her history, spanning the early 1700s to the mid-1800s, with lots and lots of science through the head of a complex, knotty, cantankerous, stubborn, lovable character. This was like a really nourishing, delicious meal. I’m still thinking about it and thinking with pleasure of reading it again.

Oh, another year goes by and I think, “UGH I’m the slowest writer in the world will never amount to nuthin!”

“This Paradise, or Some Other One” in moonShine Review v. 8, issue 1

“This Paradise” started out as a joke years and years ago. There was a meme going around LiveJournal posting the titles of five works in progress, so I wrote five fake ones, one of which was “I left my paradise in my other pants.” The story includes a talking peeper frog, and the lovely folks at moonShine placed a gorgeous photo of a teeeeny-tiny frog next to the first page of the story.

“Estate of Crime” I wrote backwards, from ending to beginning, at my kitchen table while my friend Ben ate breakfast and talked to me and I thought about how one cannot kill houseguests for talking to you during breakfast when you’re trying to write. He very kindly ignored my surliness, and eventually the story made it where it needed to go and even found a home. It is not a happy tale. It’s about a fairy, and she is not very nice, and boy does she get punished for it. A relentless thing that many editors hated and many friends loved.

“Blodeuwedd” (about the Welsh myth of the flower maiden) was the featured poem in Niteblade in March – I was thrilled to be featured and to have a lovely drawing to go with my poem.

“The God in the Corner” appeared in the Summer Solstice edition of Eternal Haunted Summer. I wrote this one back in the mid-1990s. It took a long time to find its place.

“We Named Our Grief Irene” appeared in the Fall/Winter 2013/2014 issue of Iodine Poetry Journal. The fall after my dad died, Hurricane Irene hit our beloved area of Vermont and caused terrible damage. This poem is a howl of my grief.

“It Is Now After” appeared in Dark Mountain v. 4. Dark Mountain is a super-interesting project, and this is a dense, beautiful book. My poem is about remaking the world after the world ends. I didn’t expect it to turn out so hopeful.

“Two Ways of Lifting” appeared in Mythic Delirium 0.1. My friend Amal El-Mohtar lifted a deer off the ice, and this poem fell out of me in response.

“The Giant in the Mountains” appeared in the Giants issue of Spellbound. I had been trying to crack this excellent children’s market for a while. It’s a great magazine, and it was been fun to stretch my muscles by writing for children. I was so pleased to find success.

Scheherazade’s Bequest v. 1 no. 1, As You Wish. What a hard, satisfying job it is to edit such a thing: to read, to argue, to choose, to plan. I’m so proud of our wonderful authors. And check it that insanely gorgeous cover art by Rima Staines!

And hey, I also write for work:

Advances in Statistical Bioinformatics: I wrote the introduction.

That one is just as exciting as the title would lead one to believe.

“What ever happened to that Virginia person?” asked Reader 1 of 6

“Gosh, it definitely can’t be that she fell into a hole composed almost entirely of back episodes of Supernatural,” answered Reader 4 of 6.

Oh Reader 4. You just don’t know me as well as you think you do.

I have been busy busy for past months getting a new job, which so far keeps me far busier than I have been in a long time. Job hunting is balls! I’m glad it’s over. I’m glad to be running at top speed on a gajillion projects at once. It makes the day go by quickly. I do like organizing things.

Another new thing: book! It feels very fancy to have my name on Amazon. It is a good book, filled with excellent stories and poems! Editing an anthology is no slouch.

My friend Sweet Pea said to me not to long ago, “Why does every call for submissions say to send your best work? What kind of moron would send something otherwise?”

I could only howl with laughter.

Long ago and far away I read at a women’s poetry open-mic in Chicago. My sister was in town, and a bunch of my friends showed up. I was as nervous as a cat when The Carrier is in the room. Mostly sissa and I remember it for the lady who read part of a story about “COSta Rrrrrrrriiiiiiiiica!” but there was also a woman who stood up and said, “So like I wrote this at work today when I was bored and what the hell, I hope you like it.”

I about had a stroke on her behalf.

I am an annotator of cookbooks. An example: 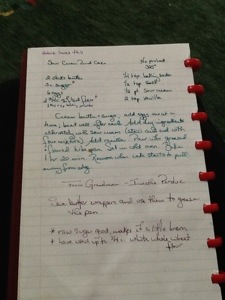 That cake is currently baking in my oven.

Originally I started making notes just to remember which recipes I like in cookbooks, then to note changes that were both successful and un-.

Since my grandmothers died, my annotations are a way for me to project myself into the future. I know how much it means to me to have recipe cards in the handwriting of beloveds no longer around. I remember how much I loved pulling out the old, raggedy pieces of paper every Christmas with the recipes for fondue sauces and birds-nest candies.

I hope some child in my life grows up to love to cook and will want all of my notes, the stained pages that mark a recipe used over and over.